From the Watchtower: Introducing the Étoile Cheval

From the Watchtower: Introducing the Aegolius Harrier

From the Watchtower, introducing the Aegolius Harrier

As part of the TToT15 Blog Like a Boss challenge, I present another Watchtower Universe focus. The Aegolius Harrier is a Starfleet ship – which is strangely a departure for me – assigned to the post-war region of Cardassia to aid relief measures.

The Excelsior Class Aegolius Harrier. Obviously, the ship is standard Trek fare and familiar to most fans. Now as my moniker states, I’m a fan of the Miranda class but given the similarities with the Excelsior it was not hard to extend love to this TMP era ship. The ship design chosen again had to reflect the story telling opportunities I wanted to explore.

With the Aegolius Harrier, I wanted a ship and a crew that was far from state of the art. In fact, in the first story it makes mention of scraping the bottom of the barrel. In many ways, that’s the case here. The ship hardly saw action in the Dominion War and when it did it got badly mangled in the fight. Now post Dominion War the ship is pressed into the Eleventh Fleet relief measures for Cardassia. No one wants the assignment and no one really wants the Harrier so that’s exactly where it gets dumped.

Then step onto the scene a new captain, Cyste Ryaenn, a contentious figure with a very pained past whose past experiences with the Cardassians seems to make her a very poor choice indeed to be assigned to this mission.

By the Dying Light – a compelling little short that introduces something of the character and past of Cyste Ryaenn.

Born in the Aenar city of Laibok, Cyste Ryaenn is a hybrid Aenar/Andorian.  Her mixed heritage meant she was born with the ability to see but without the Aenar telepathic abilities. Instead, Ryaenn developed a highly sensitive bioelectric ability to read that serves as a kind of echolocation to sense movement and various spectrums of electronic power.

Her lack of telepathic ability did mark her as an outcast among other Aenar, yet her bioelectric ability allowed Ryaenn to gauge superficially the mood of others. These abilities also gave Ryaenn an edge in her combat studies when growing up and her father schooled her in various Andorian fighting techniques.

However, Ryaenn’s bioelectric sensitivities also meant that she grew up intrigued by the world around her and given her mother’s upbringing in the peaceful Aenar tradition, Ryaenn forego her training to apply herself to scientific studies. She enrolled at the Andorian Science Academy to begin her studies before applying to Starfleet.

At the appropriate time, Ryaenn joined Starfleet and trained specialising in the sciences. When she graduated from the Academy, she was assigned to the Constellation class Sagittarius an exploratory vessel specialising in the study of nebula. She served on the vessel in a consistent and reliable fashion and earned a promotion to Lieutenant [JG].

That same year, when the Sagittarius was exploring a nebula near the region of Minos Krivan the ship was ambushed by a Cardassian galor. The ship was heavily damaged and had to be abandoned. The Cardassian attackers destroyed the ship and captured the escape pod survivors. They were taken to an undisclosed prison camp where they were subjected to interrogations, torture, mind games and forced to take part in war games.

Ryaenn a scientist and brought up a pacifist by her mother struggled in the early months of her incarceration but when attacked by a glinn who attempted to rape her she found the courage to fight back. Brutal reprisals saw her almost beaten to death and when healed she was thrown into ‘The Pit’ an arena where staged war games pitted the prisoners against Cardassian forces. Cyste Ryaenn learned to fight back. She learned how to survive. She learned how to kill. She bided her time to find a means of escape.

Four years after her imprisonment, Cyste Ryaenn was the mastermind and driving force behind a mass breakout from the prison planet. All of the prisoners escaped – no guards escaped her wrath, every last Cardassian was found dead. The events and details of this escape have never fully surfaced and the Cardassians though keen to hide the events did attempt to extract Ryaenn for war crimes.The particular details of Ryaenn’s captivity and subsequent violent escape have never fully come to the surface and this served to attach much speculation and rumour to Ryaenn’s subsequent career path.

What is known is that Cyste Ryaenn was particularly mistreated by the head Cardassian scientist because of her bioelectric reading abilities. The effect was to skew her abilities and to this day, she suffers from abnormal side effects of heightened sensitivity at times, for example, when she undergoes transportation. It is also known that a large number of the senior crewmembers were killed and that Ryaenn took up the leadership mantle for the surviving crew and orchestrated the violent mass breakout from the prison planet.

Upon returning to the Federation, Ryaenn underwent intensive counselling and extensive Starfleet debriefings. To Starfleet’s and everyone’s amazement, Ryaenn chose to return to active duty but citing the desire to switch to the command track. Given her notoriety with the press and among Starfleet rank and file, Admiralty complied with the request though hesitant given their access to details about her actions on the prison planet. After two years of intensive accelerated command training and extensive training in various martial arts, Ryaenn left the Academy with the full rank of Lieutenant and in the command division. She reported to the Saber class Korishaen.

Aboard the Korishaen she served as the ship’s third officer where she served until the onset of the Klingon-Federation war. During this war, the ship’s second officer was killed and Ryaenn acted up as second officer. During the conflict, the ship’s captain was promoted to a new ship and the ship’s executive officer promoted up to captaincy of the ship. At the new captain’s request, Ryaenn was promoted to first officer and commander. She served in this capacity during the Dominion War and in the last months was acting captain when Captain Orwers was killed in action.

With great reluctance, Admiralty have given Ryaenn the temporary commission of captain to the Aegolius Harrier. She retains the rank of commander but onboard is captain of the vessel. And her command is not greeted with enthusiasm from many quarters – from among Admiralty to the Cardassians and from among her own new crew.

The First Officer – friend or foe?

Laid back, easygoing, and very amiable, Commander Gage displays many positive traits but has failed to prove his early career promise. Ryaenn will find that she has to earn his loyalty while Gage has his own agenda at play.

Jethro Gage originally graduated from Starfleet with a speciality in Operations. His years in the department gave him terrific insight and overview of the entire running and workings of a starship. He showed much promise as an Operations officer and when promoted to Lieutenant and the posting of head of Operations, Gage began to pursue a career in the command track.

Given his early promise and highly praising reports, Admiralty accepted Gage into the command track. He showed keen understanding of how to run a ship and terrific personnel skills, cultivating loyalty and friendships easily. However, upon assignment to the Aegolius Harrier Gage’s career has become mired and shown little of his early promise and developed a reputation as a womaniser and lickspittle.

Miffed at being passed over for command of the ship, more worried about currying favour with the crew and Admiralty, and during the course of the Dominion War was happy to permit the ship’s CO to play a very cautious game.

The rest of the boat

If Ryaenn cannot be certain of Gage’s loyalties, there are others among the crew she can definitely depend upon not being loyal to her. Chief among them – Chief Engineer:  Lt. Commander Klaus, a Tellarite and like any Tellarite given to being mean and moody and always ready with a complaint. Not entirely incompetent but no miracle worker and needs a great deal of suggestions from his crew. The new MCPO Willows shows more engineering flair and leadership in the department. This irks Klaus considerably and they have a very terse relationship, which makes engineering a very fraught department.

The Harrier’s CMO: Genevieve Atlee, is a pawn to be used by others in their schemes against Ryaenn. A reluctant field doctor wants to return to her lab research facilities, naive, tends to worry, easily frightened, an able medic but can panic under pressure. How will Atlee fair when the ship is on the precarious frontline of the post-war Cardassian region.

Then the thorn in Ryaenn’s side – the assigned Counsellor: Joe Marsters. Genial, kind hearted, patient, is pushed to the limits however by the captain’s reluctance to endure more counselling. A new assignment to the ship as the captain comes onboard he has been sent with specific instructions to keep a careful eye on Ryaenn. But Ryaenn has her reasons for spurring counsellors and this may harm her cause more than anything.

If she cannot depend on the above, there are stalwarts Ryaenn can lean upon. Chief Science Officer: Lt. T’Vala. Stoic, smart, for a Vulcan can be seen as arrogant but she is honest and blunt rather than arrogant. She though has a long-standing feud with Gage and sees through his bravado and pretence. In Ryaenn she sees someone worthy of serving under, however, will Ryaenn’s more blood dripped past colour loyalties?

At Tactical: Lt. Anjek, Andorian is fierce, loyal, resolute and a strange budding chemistry springs up between the two upon first meeting. Perhaps in Anjek, Ryaenn sees a kindred spirit, a survivor of the war who lost his leg yet has pushed himself to recover. He knows the cost of failures and how much depends on commanding officers making the right and the tough calls. Ryaenn seems to be the captain he longs for but could their relationship get more complicated?

Then there is security -enlisted crewman, Rylek Devaroha’meren or Devaroh Ameren. Cocky, impudent, and aggravating are some choice descriptions of Ameren but he is also cheeky, irreverent, calls a hyper spanner a hyper spanner, and is a loyal friend and lethal enemy. Charming, sincere, good listener, agile, swift, compassionate but also smiling and always looking to enjoy life though by turn can turn deathly serious.

He made a blood oath to Ryaenn to stand by her side for saving him from the Cardassian prison. Entered Starfleet only at her bequest but did not want to be an officer and instead signed up as an enlisted transferring to whatever ship Ryaenn was posted to. His loyalty to the captain is unbound.

And into the mix steps …

And then to compound Ryaenn’s difficulties and the problems that will face the crew of the Aegolius Harrier comes a new directive to help support the relief measures for the Cardassians – Cardassian personnel are to be assigned to ships serving in the taskforce. And among the number sent to the Aegolius Harrier is a double agent with an agenda yet to be realised…

By the Dying Light… 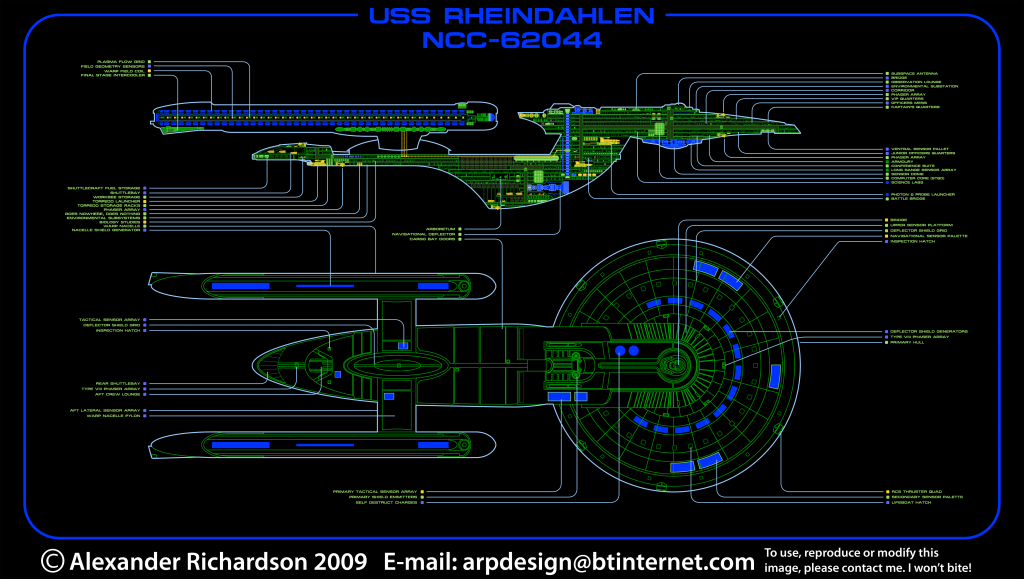 Deck Listing based upon details from Obsidian Fleet files