Of Collaborations and Round Robins

Agggh!!! How do we cope when technology fails?

Now, first off, this isn’t really meant to be any kind of writerly how-to-do. Actually, first off, this isn’t some sort of sci-fi fanfic retail enterprise – although imagine that – one slightly battered Miranda class, formerly of the Border Patrol Service, previous owner a rather eccentric captain with a taste for tradition wood and naval motifs. A fixer-upper for those looking to enter on to the property ladder.

As I said, this isn’t a post about that! However, I am going to talk about locations or more specifically settings of stories. My stories and hey why not yours too!

You see, because I have a number of projects in the pipeworks with new and different for me settings, I had asked a question in Expanded Universe group but then deleted it as it had triggered some thoughts for a potential blog topic. Basically, I had asked there just where and why had people set their story – what class of ship? Did you have a preference? Was the choice based on the type of story you were looking to tell? Did you create a brand new ship? Or did you choose a canon design because a certain ship was a particular favourite of yours?

Now, to my dear readers, I still want to ask this question and please offer up your thoughts to the above question and the thoughts that follow. Feel free to tell me why you chose your ship, etc. Just cos I’m curious like that.

Anyway, I like to think that the choice of ship isn’t just about your favourite ship design or to have a cool ship or what not. Certainly, I don’t think that is what governs many of the stories that grace our archive site. But our stories are not about ships. The ships are but vehicles for the story and the crews we write about. But they are important settings for the stories and in their own way shape and tell something about the stories. Setting the tone for a story can often be achieved through the setting. I have evidence for this and thoughts of my own. I’ll talk about some of my own choices at a later date, although with the moniker Miranda Fave you might just guess one of the reasons! 😉 However, I am going to be a little bold and talk about some of the stories that we have here at Ad Astra.

Let’s first take a look at regular favourite read. Let’s look at Gibraltar‘s stories. Set on a Connie you know that this is going to be a crew pitted with seemingly insurmountable challenges. Sure enough, the Rock gets more than it bargained for each and every time. But it also means that the crew – and so the story – has the challenge of overcoming the troubles it faces through ingenuity, guts and hard choices. I know, all of our crews tend to face such circumstances regardless of their ship – but with the Gibraltar that is immediately inherent with its set up. Add to that, the Gibraltar crew face certain challenges of discrimination by their Starfleet peers by dent of their lowly status. This of course has only been reinforced over the course of the series with the Gibraltar earning a reputation as a hard luck (read bad luck?) ship. 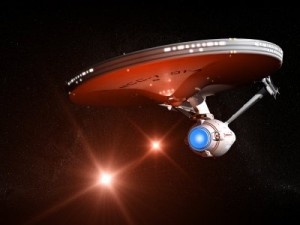 Another trick I think of using the Constitution class is that it is a well known setting, regardless of which fanbase or franchise you come from as a reader. This makes Gibraltar’s stories immediately accessible and … here in I think is another trick means to say that the author can write first and foremost about the characters and story, without overly worrying about the scenery painting. And taking a sneak peek at the new Gibraltar story, it seems there’s going to be an interesting development for the crew and ship …

Let’s contrast that with a more futuristic setting. That of Captain Sarine‘s Restoration. In a future setting of the Federation, a controversial figure is given a controversial command of a brand new spanking ship that hopefully can be a sign of the Federation rebuilding anew and comes at a precipitous moment as contact is sought with the mysterious and very alien Laurentine Hegemony.

This new ship, the Redemption, has a cool bridge with cool technology with holographic interfaced stations, that lends it a familiar but also a new and cutting edge feel. Now this would be all well and good given the fact it is future story setting. But the details Sarine provides are terrific at giving the whole setting and story a far flung feel that lends to the story being told. It adds to the everything is different story element of the story of a fractured intergalactic situation. The unfamiliarity of the setting and the technology it uses serves to underline much of the unsettling and unfamiliar setting of the myriad story plots and shifting politics of the galaxy. It also serves to parallel the fact that so many of the characters have hidden backgrounds and subtext to their interactions with other characters. And the apparently exotic nature of the ship’s technology though pales – simply pales – in comparison to the sheer craziness and even yucky squeaky factor of the alien setting.

Another contrast now for you to consider here is Nerys Ghemor‘s opening sections to The Thirteenth Order which to me was filmed in washed out colour, the setting a grim and grey stark prison planet where the seeds of a dangerous rebellion is born and an unholy alliance is forged. Whereas with Sarine’s story, we are given colour and exotic smells and sights, we begin this story with a dull colourless backdrop. The feeling of the setting is that it is devoid of all life, only prison walls, barbed wires and mined rock quarries surround the cast we are to be introduced to. Maybe this signifies the ugly starting point for all concerned amid the horrors of the Dominion War, defeat imminent for Starfleet with heroes captured, the Cardassian honour crushed under the yoke of the Dominion heel as the price for victory comes at too high a price, and all of it representative of the grave choices, tough decisions and grim realities the characters will have to face in order to escape and then seek freedom in more ways than one. The other facet here, is that we will turn from this bleak setting to  absorb a rich and fascinating window into Nerys’ vision of the Cardassians.

If I am then bold enough then to turn another example, where the setting can be more than just a ship, it is to look at SLWatson’s Arc of the Wolf and other collected stories featuring the figure of Montgomery Scott. Scott in himself could be the setting such is the manner in which Steff inhabits the character of Scott. However, so often the setting for Steff’s exploration of a young pre-cadet and cadet Scott is Maine, of the ole US of A. I’ve never been, but I’ll be sorely disappointed if Maine does not measure up to the depictions I have created in my mind from reading these stories. Maine is almost a character of the stories, such is the way that Steff writes it. How does this serve her stories? I dunno her own opinions on the matter but for me, they ground the miracle worker of Scott in the real world. Fans have long lauded Scott and over time that has added a fanciful rose tinted aura to the character that probably has made us lose sight of the real man of the character. Steff strips the legend away by going back to Scott’s roots, back to the nitty gritty of his origins and the formative years of his character. She bases these stories on Earth, in Edinburgh and then in Maine. It is almost a stark setting regardless, pitting the human face against the cold, the wet, the dry rustle of autumn leaves, the warmth of a golden setting sun. It also means that stripped of many sci-fi elements of a spaceship setting the stories are intensely focused on characters.

But just in case you think Steff only writes Earth based stories, I turn you to her Mirror Universe Arc stories – Echoes, Silence, Patience and Grace. Here the stories are pretty much based on the MU Enterprise. But forget the camp ‘everyone is evil’ pastiche played up by DS9’s later MU episodes. Instead, this is grim, grim, grim. It is an absolute must read that I cannot recommend highly enough. The Enterprise is the setting but the sixties colour washes on the corridor walls are absent amid the dark motives and agendas of the characters found herein. And again, it is the character of Scott who is the constant, a silent assassin who stands out starkly even against such a stark background.

But want an Enterprise that is bold and heart-warming? Ok then, I turn you to Terilynn‘s Heritage. The scene where the character Beth Riker walks towards her new command, the new Enterprise-G, is a love letter. Like TOS and particularly the motion pictures, the Enterprise feels like part of the cast, such is the affection for the ship that seeps through. It is in fact, fitting though that the setting is so warm as it is family both blood, extended and the professional bond of loyalty, that threads through the various characters and story that is primacy in this tale.

So you start to see what I mean – or at least I hope you do – about how settings can shape a narrative, set a tone, and set the story. I aim to share more of my thoughts on this matter and give some insight into my own choice of settings – LOL insight?! did I use the word insight when about to refer to my work?! LOL! Anyway, until then, why not share with me some of your choices and favourite settings.