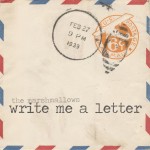 Challenge number two. Write a letter to a crush. Admittedly, I have to scratch my head for this one. I’m not sure which of my characters have a crush on any other particular character. Certainly nothing that readily constitutes a ‘crush’ albeit there are some with unrequited or unrealised feelings for other characters. Other relationships have that ‘shippy’ possibility but are rather nebulous in their development to be termed crushes just yet (lest I crush them!

Anyway, it’s too early in the game to cry ‘impossible’ and I did proclaim the purpose of the exercise was to write and beget more writing. 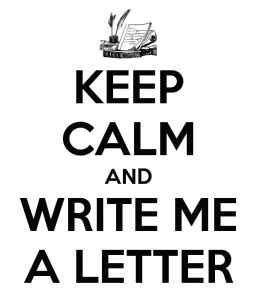 So onwards and upwards. I have chosen then to write a letter from the pen of Kestrel‘s chief engineer, Eddie Gardner. It’s been hinted at, or should I say, I’ve hinted at it but maybe it wasn’t hint enough, that he has certain feelings for one Dr. Judith Monroe. Of course, Eddie isn’t like to ever reveal any such sentiments or feelings because … well … he’s kinda prickly and sour and mean and likes to carry the whole hang dog mopey face thing about him.

Eddie’s not the write a letter type so imagine if you will a recorded log and a slightly worse for wear Eddie Gardner sitting in the dark of his cabin after a night of drinking in the Senior Officers’ Lounge.

I, this message, this log is, what I boys why am I doing this? Judy, Monroe, I’m trying to tell you something, something I’ve wanted to say for a long time; but can’t say. The point, what I mean to say is …

Huh, I know what you are going to say. ‘Your’re drunk Eddie!’ Yeah, yeah, I am. I am. Only thing is, I’m not. Not really. Not as drunk as I want to be. As much as I … ahem … yeah. Ole Eddie, that Gardner one, he’s a lousy drunk. It’s what they say. It’s what they use to say about me. I was a nobody. Just a stupid lousy drunk. And then, McGregor.

I saved him. But he, he’s the one that ended up saving me. McGregor. Huh! Is it any wonder I don’t tell you … that I can’t tell you what I want to tell you. Not when there’s him. Not when you … I see it, plain as day on your face. In your eyes. They sparkle and your face is beatific, always, always, a light shines from – from – from within you. You’re light. Not light. But ye’know, shining, bright, cheery, hopeful and optimistic and yet … you’re not deluded. You’re pragmatic and smart. And beautiful. And classy. And light.

No wonder I don’t say anything. What could you ever see in me? I’m … dark. Moody. Grumpy. Sour. I’m polar – I couldn’t be more different to you! But you make me – you make me want to smile. You make me want to forget all the crap and stuff and all that. When you’re about, I think about now. Not about the past and what I screwed up. I just enjoy the moment.

I know McGregor isn’t just some sort of crush to you. I know, I know that he has these qualities you seek. I just wish you could find them in me. I wish. I wish, I wish I could say these words to you, instead of skulking here in my cabin, pining, moping and wishing over you.

But I know what I’ve done. The mistakes I’ve made. The people I should have been happiest with in life, I pushed them away and pulled the bottle in closer to me. I’m not really a lousy drunk ye’know. I want it, more than any of you know. But I don’t. I don’t. I don’t cause McGregor picked me. Cause he knew I knew the Kestrel. Cause he believed in me. And I couldn’t, wouldn’t let him down. And I couldn’t knowingly let you down Judy.

The bottle it would be a welcome oblivion. A neat little escape. But each morning, when I want to reach out for the remnants of last night’s I see your cup sitting, waiting, in the replicator alcove. Your ‘surefire hangover cure’. Every morning. You get me to start anew. Refreshed. Ready for the day. But it’s the act and the thought of it that really works and makes me make it through the day. You give me hope Judy.

You give me hope. But not enough hope to believe that we’d ever make anything out of it. Not when your heart seems set on McGregor. But just know, my heart it’s, it’s, it’s set on you. Maybe someday I’ll actually be brave enough, stupid enough, or drunk enough to send you one of these messages.

[pullquote align=”center” textalign=”center” width=”70%”]”Well what then? Is it Gardner? He’s fond of you. Maybe his feelings are reciprocated.”