This one is a bit of head scratcher is it not? I mean, is it a letter to your dreams or to a dream – a dream date, a dream ideal, what? And which character then to write to said dream? All sounds a little whack does it not. So I’m going to make it even harder on myself, and write for a character who has very weird dreams – more like visions. Our dear ‘Ole Blue‘ Stanley.

Known as Mnu Subrelqui but baptised as Stanley, by McGregor because … well … he looked like a Stanley to the captain! Stanley comes from another universe. And whether it is the nature of his crossing into our universe or the nature of his home universe being, he is prone to visions which are muddled and clouded and obscure (like all the best visions) that hint to or play as ominous portents of the future. 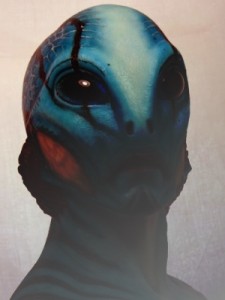 The closest image to Stanley in my head is the representation of Abe Sapien from Hellboy. He’s got the aquatic and surreal alien aloofness that’s befitting the character as I conceived him. So if Stan the Man were to have a play by it would be this.

Stanley’s origins are shrouded in mystery. We know he comes from another universe and in the Multiverse RR II ,we know that he was somehow able to detect the collapse of the multiverse and comprehend on some level the otric and pariotric* changes to the timeline – something that freaked jespah‘s Otra out a little (*terms coined by jespah).

We know also that he has a fondness for knitting. Doesn’t drink alcohol (save when he was in the clutches of Frank who was a bad influence!) and by dent of the first multiverse escapades somehow retained something of his time there to have developed an otherwise mysterious taste for Cardassian fish soup. He’s also very acrobatic and something of a pacifist.

The other thing we do know about Stanley is that he’s immensely loyal to McGregor and that McGregor, Rah and Stanley seem to have some strong bond from the traversing from his universe to theirs. In his interactions with others, Stanley is by dent stunted in his growth. He never probably grew up, just came into this universe fully as he was without any memory or knowledge of who or what he is. This also means that (after some interference from the higher ups in Starfleet Command, Science and Medical) Stanley had no real home but McGregor and the Kestrel.

“Sometimes, I hear the stars sing… I sense them. I feel the ebb and flow of the galaxy.” Noah shifted uneasily as a lump formed in his throat. Stanley noticed Noah’s discomfiture. “I do not mean to, how is it Captain McGregor puts it? I do not mean to ‘freak you out’ Ensign Noah. Merely I wish to inform you that I appear to have extra-sensory abilities. I cannot elaborate any further than because I do not understand it.”

This means that McGregor somewhat adopted and reared Stanley. So he probably did not have the best role model in the world and yet he did turn out all right. After all, Old Blue is caring and compassionate in his own manner and way of things. And if nothing else, Stanley is honest speaking in the innocence of a babe, a trait he has not lost over the years.

If Stanley remains something of a mystery to others, he is equally a mystery to himself. It is thus that I can imagine him keeping a journal as such to explore his unusual visions, possible precognitive insights, fate, or possibilities of what may be.

As per your request, I am writing about my vision in this journal. McGregor calls it my dream book. A falsity I believe given the usual nature of the visions. It would perhaps be more apt to call it a nightmare book. Again, I am witness to death. The death of many.

I do not process emotions in the way of you humans or of the other species I have encountered. How can we truly tell what one person, let alone their species, feels like? However, if I were to ascribe an emotion to how I feel, it would be pained, troubled, fearful. I think I am correct in this deduction. For I see these things mirrored in McGregor. I see them mirrored on your face too Doctor. Commander Cartwright’s too. Even Lt. Commander T’Vel cannot hide the troubled look in her eyes.

What is worst is that the trouble they feel is nothing in comparison to the danger, threat and peril I felt, sensed, witnessed, sorry again I struggle for the right words, in my vision. The details remain … like the swirling eddies of a nebula. Dreamed fragments drifting on a fog of delusion. But though the details are muddy and clouded, the emotional flux of the vision lingers strongly still. Death. Death Doctor Monroe. So much death.

I am fearful for I sense that this is a path we are on. A path we cannot deviate from. Events are in motion and we spiral towards this moment, this conclusion to all things. There is fire. And carnage. Debris and ruins. Bones and blood. I hear the screams of the children. I hear the anguished cries of comrades, the fervent pleas of mothers, the imploring of friends, the anger of enemies. I hear … the stars singing, singing a dirge lament for the passing and I feel an end is coming.

An end to all. All that we know. To what we hold dear.

I wish this ability would pass from me. I wish not to know of these things. I find I struggle to understand life as it is. With these visions, I learn only of death and understand life even less. I see the faces of those closest to me, I see their worries and pains and yet cannot hope to truly comprehend their emotions, nor they mine. I see their faces and I fear I will remember the detail of my dreams, that I will recall a glimpse of their pained death. I do not see their happy endings. I do not see the unfinished path or where the journey goes. I see only the ultimate final destination. How then do I look these people in the face and continue with this day and the next knowing the day that is to come?

I wish you had the answers Doctor. I wish the answers could bring comfort; That I could furnish details or clues that could avert this horror. None come to me, none exist.McGregor tries to console me with words about preventing these things coming to pass. Reminding me that the future is not set in stone. What will be, will be, he tells me, yet I have heard him sing the song to you doctor in the lounge at the piano:

The future’s not ours to see Doctor Monroe. Yet, I do see it. And I see death.

[pullquote align=”center” textalign=”center” width=”70%”]Stanley’s eyes reverted back to their obsidian blackness. With them he looked up into McGregor’s eyes. A deep penetrating look. A look that reached beyond. Stanley’s voice grew heavy and dark. It carried an ethereal feel to it. A solemnity. A weight. An authority of apocryphal prophecy. “Flames! I see flames. I see death. I see dogs – a pack – hunting down a winged bird – us – surrounded. Death.”