Day 4 – Your Sibling or Closest Relative

Again, it’s all relative in this letter writing challenge. A sibling letter did conjure the possibility of a Tom/William Riker letter but I don’t tend to write and play with canon characters so there goes that idea. However, I do like the idea of messy complex relationship affecting our/my characters. Given how important and big a role family can play in our own lives, it stands to reason it should play an important factor in the lives of our characters (or many of them at least).

Once more for the Russian roulette of choosing which character to write for this time because again despite my above assertion, family hasn’t featured largely within my stories. (I really need to get more stories posted and completed). 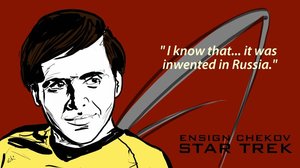 Russian roulette does however put me in mind of a few characters. Outside Chekov and Worf that is. There’s my siblings from the original inception of Accipiter, Moira and Nathan Nikochevski. Yes, I did that fanboy mistake of putting two family members onto the one ship! Actually I didn’t really – quite – as I killed Nathan off and his sister was only on the ship visiting him and got up in the events of its launch. It was all quite a spectacular opening episode!

The other character Russian roulette puts me in mind of is a character you guys haven’t seen yet – super former spy agent mmamamm. As you can see, I’ve matured greatly as a writer! How much more fanboyish could this character be even on paper. Well she’s a she. She’s part Vulcan, part Romulan. AND Russian. Hello Mary Sueski!! But that’s all part of the fun of creating such an expansive setting of the Watchtower universe.

Hope Station also features a set of twins, Darren and Warren but since the two of them are practically attached, it didn’t seem feasible to have one write to the other. They are a fun dynamic to play with, finishing and interrupting each other’s sentences. 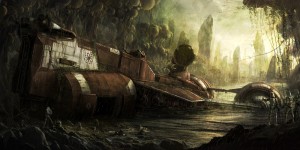 The Rhapsody Rabbit Gavilán as found by Tabatha Chase.

Yet, I decided in my spin the wheel of characters and stories to write the story from the point of view of my flower patterned dungaree wearing Caitian mechanic, navigator, medical aide and chef Meetra Ros of the Rhapsody Rabbit Gavilán. Given the civilian nature and size of the vessel, everybody plays numerous roles (everyone takes a turn at playing chef – except Tabatha – a captain’s prerogative and to the best for the others given her lack of culinary skills).

I wanted to play a Caitian character in one of my stories for a long time. I’ve had Rah of course in Kestrel but the man is a Kzinti and a whole lot more feral than the pleasant, charming and light Meetra. Quite frankly, I think a Caitian character should almost be obligatory for any OC crew! I dunno, just something cool about them.

A Caitian from Star Trek Online

By the time you receive this message, I should have arrived on Q’onraf. It is a fascinating planet. It is Klingon to the core, with talons and claws and menacing fierce warrior statues on every corner. More than that, they live by a curious by-gone code here – The Way of the Blade. The traditional skill of the Bat’leth is highly prized and the use of charged weapons is scorned, so much so in fact that it is against the law to carry such weapons on your person.

To think you thought my decision to sign up with the Skipper was foolish. I told you, I would see the universe through a specially unique lens travelling with Captain Chase! See, I was correct. Only in her employ and through her myriad of contacts would we have cause to travel to this planet. Most others would by-pass it.

Presently, things are interesting closer to home without the need to travel afar. We have taken on a new deck hand. Dale Garrow is a sweet and curious boy. He’s only new but I like him already. The Skipper must have seen something in him to have asked him on board. He’s a little green to the way of things, Mother bless him. Dale’s been too use to a life on a Starfleet ship and life within the Federation to understand the true way of things. He’s learning the ropes, literally of course, as you recall from your trip aboard the Rabbit.

Then there’s our two passengers. Brahm seems nice. He’s very courteous but he’s very reserved. Maybe that is because he is Cardassian and especially so because we are entering into Klingon space! He’s still very intriguing. I mean, why is a Cardassian travelling about on some sort of secret business with a Vulcan professor. I don’t trust her one bit. She’s some sort of doctor or professor but she does not strike me as the bookish or laboratory type. Ajshae is … dangerous. She’s got that killer vibe about her. We’ve met enough mercenaries in our type to recognise the type.

I am not alone in these thoughts. The Skipper has had words with our mysterious and rather rude visitor. Bora is suspicious of her. He’s normally reserved and level headed but I see him watching Ajshae closely. Skipper has tried to embarrass Bora by implying he has a crush on her, but I do not believe it of Bora, he’s far too practical to ever like someone like HER. Obviously, Dale is like a little cub in puberty, hankering after her with wide eyes and I can scent the lust on him. But it is a silly notion on his part and I think she plays up her mystery vamp angle to get what she wants. I will be glad when she leaves the ship!

Otherwise, things are going slowly but surely. Hex is having to work on the engines a lot. Our last departure was … eventful but nothing for you to fret about Gerruss. Just a misunderstanding that escalated a little. We simply had to leave a lot sooner than we expected and it taxed the engines some is all. Honestly. Nothing to worry about. Meantime, he really enjoyed the rheeta rolls recipe I tried. Thank you so much for it. hex thoroughly enjoyed it. He said it reminded him of his third wife’s meat roll. Alas, we are not sure if he means the third wife Hex ever had, or if it was the Dari host’s third wife. Dari got married at least ten times apparently. That’s a lot of wedding anniversary dates to keep track of!!

I hear Skipper calling me. We are reaching the demarkation line, so if I want this to reach you, I have sign off now and get it sent. Take a care Brother. Be well and may The Mother bless you!

[pullquote align=”center” textalign=”center” width=”70%”]”Meetra, meet our newest crew member, Dale Garrow. You’ll have to help show him the ropes, literally, as he’s new to the freighter business. Dale, this is Meetra. She’s part medic, part navigational operator and all chef!  … I told you about the no replicators didn’t I?”